Being Low-Key: I'm Good, But No One Notices 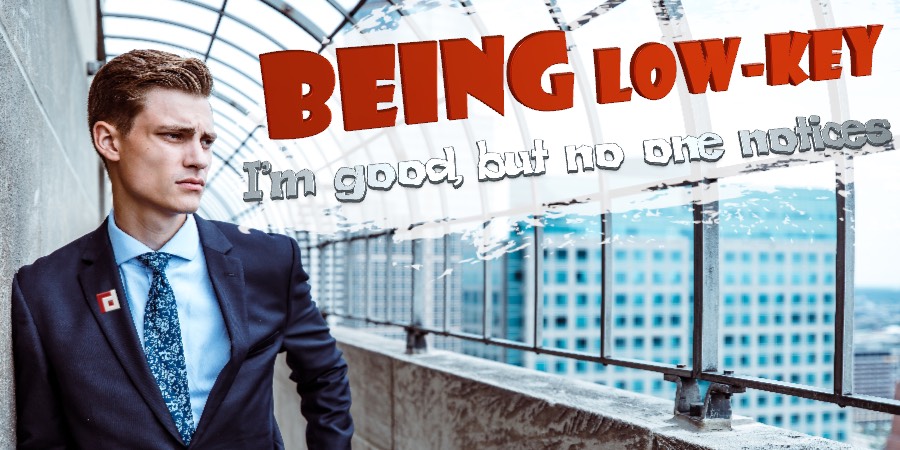 You are good at the job, perform well, often even better than your colleagues - but hardly anyone seems to notice and the rise remains. One possible problem: you are a professional being low-key. Your own achievements are not mentioned or talked small, you are not pushing in the center and are not looking for the big stage. Unfortunately, in the job, low-key employees are often overlooked and even outdated by mediocre colleagues who stir the drumstick. We explain why being low-key will have a hard time and what the humble ones can do to escape the consequences of being low-key.

Sympathetic, but bad at the job?

No one likes bragging rights. Constant I-am-the-best-fuss gets on most people's nerves quickly and when a colleague daily tells of his achievements and successes, the office neighbors roll their eyes. Already in childhood, we learn not to brag but to behave modestly. Being low-key is placed in the cradle, so to speak.

One reason for that: Being low-key is extremely sympathetic, modesty is a desirable character trait. No wonder that parents want to see this behavior in their own offspring and promote accordingly.

The problem: In the job, this likable property is doomed to many. Who downplayed their own achievements or not even mentioned, ensures that they are overlooked and forgotten. Colleagues who do not do this are all the more noticeable, collect points from the boss or even claim the honors of the low-key employee for themselves. The consequences of being low-key should not be underestimated:

Low-key employee experience again and again that promotions and salary increases go past them. Instead, only their colleagues are happy. This is mainly because the boss does not perceive the successes and achievements due to being low-key. Others in the office advertise on their own behalf and remain in mind of the management while low-key employee’s career standstill on the spot.

Knowing that one's own abilities are superior to those of one's colleagues, and yet watching how only others make a career, is extremely frustrating. Many low-key employees even seek a new job due to perceived injustice - where the same problem can lead to the same situation.

Who tends to be low-key?

Being low-key is a matter of personality and the environment. So everyone can become low-key. However, there are groups that are particularly likely to put their own light under the bushel and present themselves as low-key:

Of course, there are men who trivialize their successes, but this behavior is more common in women. While men openly advertise themselves and bathe in the light of their own achievements, women act more reserved, do not peddler with achievements and play down their own abilities.

Shy and withdrawn people avoid big attention. Even great services they prefer to keep to themselves. They let their actions speak and barely say a word about it.

If you are new to a group or a team, you want to present yourself from your best side and find a connection with your colleagues. Especially new colleagues are therefore reluctant in dealing with early successes and talk down about them.

The good news: Low-key employee can learn to change their own behavior and become more visible in the job. However, that requires a lot of practice and stamina. Such a habit, which has established itself over years or perhaps even decades, can not be put off in a few days.

No reason not to face the challenge. The following tips will help low-key employees:

Recognize your strengths, successes, and achievements

Understand what you are good at, where your strengths and talents are - especially if you are better than others. You should be especially proud of these areas instead of talking them down or portraying them as insignificant.

The same applies to your successes and achievements. If you have achieved something, achieved a goal, then pride is a normal and appropriate feeling. Allow yourself to have some outstanding qualities.

Low-key employees tend to belittle their own praise. Mostly with phrases like yes, but that was not so difficult ... or that would have done by any of my colleagues too ... Learn to accept praise in its entirety.

It is even better if you reflect and reinforce positive words again. With a yes, with the contents, I could really convince the customer ...

You do not have to wait for others to address your achievements and praise them. In the job, it is perfectly legitimate to talk about your own achievements. Especially to the superior. Do not sit silently at the table at the project meeting, but take the opportunity.

Tell me what you did. Report the progress you could make in a short time. Sometimes you have to rub the boss's achievements under the nose to see how important you are to the company.

Low-key employees often disappear in the crowd because there are louder, more eye-catching colleagues. To change the behavior, you must dare to stick out and stand out. That's not easy, because whoever stands out make themselves vulnerable.

By talking about successes and achievements, you can also become the target of criticism and negative feedback. Do not let that put you off. Being criticized and learning from time to time is important to grow - and a small price to benefit from your successes.

Last but not least, even former low-key employees should not overdo it with self-congratulatory. Otherwise, although the low-key end, but is replaced by unpleasant inheritance.

This applies to low-key employees: The dose makes the poison. Understatement can have a targeted effect, and it can also be an advantage if your competitors underestimate you. So you have the element of surprise on your side. However, being low-key should not be a permanent state but should be supplemented by regular advertising on its own behalf.