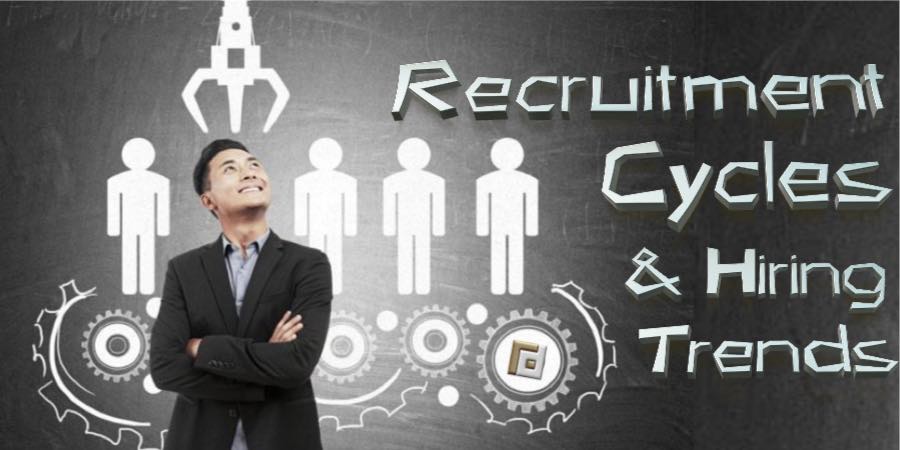 Knowing about recruitment cycles could give your job search an edge

When it comes to connecting with the right job opportunity, timing isn't everything, but it's certainly something.

Being in the right place at the right time is often a big reason why some people get hired over others. But how do you know if you’re timing your job search just right? After all, there are so many moving parts like staff turnover rates, seasonal needs, and earnings reports—not to mention the economy. Somehow, you’re supposed to hit this moving target and walk away with a job.

Don’t despair. One aspect of the job hunt to consider is the recruitment cycle. Like most business functions, recruiting and hiring activity has ebbs and flows, and if you pay attention, you just might be able to time your application to when a hiring manager is most eager to bring in new talent.

Here's a look at how recruitment cycles may factor into your job search:

General recruitment trends throughout the year

To get hired, you want to think like a recruiter, namely, figuring out when demand for new hires is the greatest. It’s easiest to think of hiring in seasons:

Winter: “The first quarter of the new year is always a busy time for recruiting because of new budgets starting,” says Paul Feeney, a partner with AutoKineto, an international executive auto recruiter. Staffers are generally taking less time off this time of year since they’re just coming out of the holiday season, which helps speed up the hiring process in quarter one, as well.

For job seekers at the executive level, the first half of the year is prime time for recruiting and hiring, says Howard Seidel, senior partner at Essex Partners (a division of Keystone Partners), a career-management and leadership-development consulting firm headquartered in Boston. “While executive hiring can happen at any time, senior job searches do have seasons where things tend to be most active—January through mid-June is the biggest uninterrupted time for search,” he says.

Spring: This is when recruiters tend to snatch up soon-to-be college graduates, says Feeney. “Companies will start recruiting in the spring to have everyone in place by June 1,” he says.

That’s not to say that you should never look for work in the summer; just expect that it will be a slower-moving process. “Job searches that start just before or during the summer can tend to drag, as vacation schedules can get in the way of moving the processes forward,” said Seidel, especially for higher-level roles that require interviews with several people in the organization.

Fall: Once the fall comes and staffs return to full force, recruitment/hiring picks up again to fill any vacant roles before the holidays roll around (and to use up budgets before they run out).

Exceptions to the rules

It’s important to recognize that some companies and industries have unique recruitment cycles.

For example, January through April is peak season for tax and accounting professionals, so there may not be a lot of vacancies for those seeking such positions in the first quarter. “The rest of the year is when firms will concentrate on recruiting since they always want their people to start before the busy season,” says Feeney.

Teachers and other school employees may find that a lot of recruiting takes place over the early summer to replace people who decide not to return for the following school year.

Paying attention to economic trends in your field can also help you predict when recruiters and hiring managers will be on the hunt. “Some positions are often dependent on the specific needs of a company in a current economic market—for example, during a construction or real estate boom,” says Seidel.

How to work the recruitment cycles

To get a better sense of when hiring in your field is up, try these strategies:

Think ahead. The budgets for some hires, especially for newly created roles, are often lumped into the next fiscal year budget. “Consequently,” says Seidel, “employers often start searches ahead of the fiscal year to have someone in place when the funds become available for the new hire. That means looking over the fall for roles that may not begin until January, depending on the company’s fiscal year.” So if you want to start a new job in January, don’t wait until winter to send out resumes—start looking at job ads during the fall.

Network during downtime. “Networking during slower periods can yield great results,” says Seidel. That’s because, during the calmer summer months and the holiday season, people may have more free time to connect and be a little more relaxed when they do. This is also a great time to schedule informational interviews.

Tap into social media for intel. Look through companies’ social media pages to try to get a sense of the their hiring practices and timelines. You might be able to pick up on a particular pattern. “Or, you can even potentially reach out directly to someone who works at the company to inquire about hiring cycles,” says Seidel.

Finally, if there’s a particular company you’re interested in, stay up to date on news announcements that might indicate a hiring boom is on the way—expansion, new product lines, an influx of capital funding, etc.

In times of talent shortage, things may move quickly. If a job is open and companies are looking to hire soon, there is no slow period. “With the current 4% unemployment rate, companies have to react quickly and some companies will get their ducks in a row and do a one-interview process and get an offer out that day,” says Feeney.

No matter when you look for work, the best approach is to hope for a sprint, but plan for a marathon. “And like preparing for a marathon,” Seidel says, “you need to train daily by networking, researching, and actively looking for opportunities.”

Get in the cycle

Keep in mind that recruiters and hiring managers are affected by many variables, including market conditions, industry, having to fill roles unexpectedly, and more, so positions can open up at any time.

This article was originally posted in www.monster.com.

Want to increase your chances of showing up on their radar? Send your resume to Fischer & Partners Recruitment and we will get in touch if there is a job vacancy matching your profile!