Ethics in Recruitment: The 5 Most Important Rules 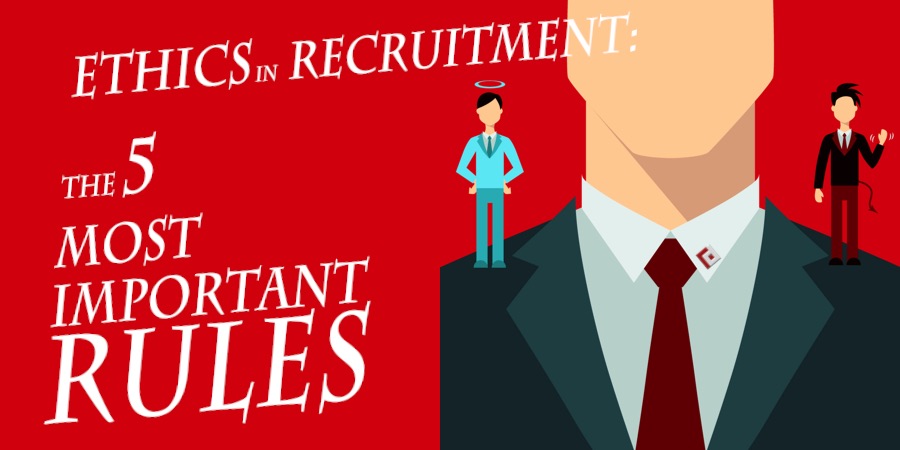 Ethics often seems to be something from the realm of morality and philosophy. But this is far from the case: in modern recruitment, it has become a business tool and a considerable advantage in the struggle for customers. We have dentified for you 5 ethical rules that are important for each recruiter.

Do not discriminate by gender, age or other unprofessional grounds

The rule, which is dictated not only by ethics but also by law [The Labour Protection Act (LPA)] , is the prevention of discrimination based on sex, racial, national, religious, age or political grounds. In this work, the recruiter should be guided exclusively by the business qualities of the employees and the psychological requirements of the customer.

The experience is shared by Phanuphan, FP Executive Search's Recruitment Manager: “I once came across a case where a foreign industrial company refused two suitable candidates, without giving any explanation. Later it turned out that the applicants did not qualify for the vacancy due to  they have small children. ”

Whatever the customer’s prejudices, the recruiter’s task is to convey the provisions of the law and explain that it is impossible, for example, to refuse to conclude an employment contract for women for reasons related to pregnancy or having children, or because of their appearance, as in the case with which they encountered.

Another important rule is to search for privacy. Moreover, it works both ways - both for customers and for applicants. This includes non-disclosure of information that could be harmful, and the anonymity of the client and the applicant until they are allowed to name them.

As for the customer company - excessive “talkativeness" of the recruiter can harm the reputation. This is especially important when hiring leading positions.

The expected question - what could be the harm to the reputation? At least that the company does not want their competitors to learn about its personnel changes. Or a person who is looking for a replacement should not know about it.

There is a similar situation on the part of the applicants: job searches should not harm the candidate. For this reason, for example, it is not worth checking his recommendations (refererences) from his current place of work.

The best approach is maximum restraint in judgments and disclosure of information in both directions.

Do not forget about feedback

Feedback is an important part of recruiting business ethics. When hiring a candidate, he spends a lot of time and effort on a test, an interview, a detailed letter, a meeting. If you have conducted 15 interviews, and for the final decision you have chosen 3 people - do not forget to notify the others. Say that you are grateful to them and you will surely add them to the database, but, alas, the company opted for other applicants. If there is an opportunity to politely and informatively explain the reason for the refusal - generally wonderful.

All of these job seekers - not even the right ones - are your social capital. This is important to remember.

Let us return to the case of refusal to candidates with small children described above. How can a recruiter be here and can he somehow save the situation?

“I think that if the employer is fully confident that non-compliance with an unethical requirement will affect the work of the employee and the company, then he has the right to refuse. But if otherwise, the candidate is suitable, then before undefined by making a negative decision you need to meet and talk, ”says Phanupan.

If you can not convince the employer, remain friendly to the candidate and do not forget about the feedback.

Do not lie or embellish

Another rule that works both ways is not to embellish, much less lie. If you want to quickly close a vacancy, do not exaggerate its advantages. After all, having gone to work, the applicant will quickly understand what’s happening, the consequences will be negative for him and the customer company. The same applies to the qualities and merits of future workers. Stick to the facts and do not promise the golden mountains.

One of the applicants told us such a case. A man is looking for a job as an accountant. He responded to the vacancy, passed interviews with a recruiter, chief accountant, and director. As a result, he accepted the offer and went to work. On the first working day, it turned out that a procurement manager was expected additional work from him, “Well, the accounting will also be there.” Two weeks of searching wasted.

Poaching: to be or not to be

An important and controversial issue is the luring of employees from other companies. How to relate to this and on whose side ethics?

There is one unspoken rule - if you bring a specific candidate to the company, you do not have the right to withdraw him from it. This can significantly tarnish your reputation. It is important to always discuss with the client open and closed search zones for him. For example, the immunity of employees of competing companies.

And what about other cases? How ethical is it to apply to a candidate who is not looking for work and does not send out his resume? The first position is that it is unethical. The other is that it is a market: no one forces anyone, the candidate makes his own decision. And it is not the recruiter who is to blame, but the company from which they are "led away", because a person will never go into worse conditions than the previous ones.

The main secret is dialogue and argumentation

The rules seem to be simple, but they are not easy to follow. Controversial issues arise from time to time. Adherence to a code of ethics can either be your advantage or add to the hassle of the customer is intractable.

How to be in this situation?

“Each entrepreneur or manager organizes the work of the company by the goals, objectives, and plans. He forms the optimal way for himself and his business and therefore has the right to formulate requirements. Nevertheless, these requirements should not contradict the Labor Code and accepted ethical rules of doing business. With those customers who initially proceed from inadequate requirements, we try not to work. As for the role of the recruiter, it consists in solving the task set by the customer. Of course, in formulating this task, the customer proceeds from his ideas and needs. And in between there is a serious gap in the formulated search task and the reality in which the recruiter works, the task of the recruiter is to fill this gap with the help of a dialogue with the customer and substantial arguments. ”